Seongsan Ilchubong, known as the ‘Sunrise Peak’ or ‘Volcanic Tuff Cone’ on Jejudo, was formed through Hydrovolcanic eruptions(where volcanoes were form by piles of volcanic ash, the interaction of hot ascending magma and seawater or ground water) about 5,000years ago. This crater has a measurement of 180m tall, with a diameter of 600m and 90m high.
With the 99 sharp rocks surrounding the crater, Seongsan Ilchubong looks like a gigantic crown.

FACT: Seongsan Ilchulbong is one of the brand new 7 Wonders of Nature!!!

Like what those who had paid a visit to Jejudo as a traveller, it is a MUST for one to pay a visit in the morning, just to catch that magnificent view of the Sunrise. (It’s really P-R-I-C-E-L-E-S-S!!)

Like what Calvin Timo had mentioned in his post, we literally woke up at 4.30am KST(which is 3.30am in SG!) in order to make our way to the venue. At the same time, your truly was contemplating if I should give this mission a miss as I was feeling really sick.(Mr Flu attacked me from nowhere)
But I guess the strong-will in wanted to give it a try, thus I decided to follow my heart.

PS: None of us drive to the venue as it was pretty dark in the morning. Since I wasn’t feeling well, we decided to call for a cab.

Gear up guys! Here we go!

Midway of the climb while taking a short break.. Soft spot for such a beautiful nature scenery.

Guess what, the moment I stepped up to the rest point, the very 1st word that popped into my brain with this scene was ‘Paddle Pop’. *LOL*

The view is strikingly magnificent.. YET! (wait till you see the photos below!)

Strikingly magnificent!!!  I was totally mesmerised at the view!!
(I’m so glad that I had ditched my bed and decided to head on the mission with Mr Flu-bud.)

Time to head back to Spring & Autumn Resort to freshen up ourselves!

Day view of the village. *awwww*

Poor Calvin. Since I’m the weakling sick girl and walking far at the back, he decided to slow down his pace and wait for me. But the wind was too strong thus he’s facing inwards and hiding at that corner to keep himself warm. *Thanks dude~ But this scene was just too EPIC!*

Look at that rock!

This is the well-known Deong Gyeong Dol AKA “Lamp Rock”, which has a myth story that link to Grandmother Selmondae. Read more HERE.

The view is just way too fabulous. Can’t stop snapping photos every time when I’m have a short break in-between.

Let you guys have a sneak of the stairs we had climbed! =/

To be honest, it was really NOT A JOKE to climb those steep stairs, battling with the strong cold wind at 5am. (With only 40mins to reach the peak as Sun rises at 5.40am!!)
I’m thankful that the 3 of us managed to make it to the TOP and much earlier before the sun rises too!
*a pat on our back*

FINALLY we’re back down at the hill.

Goodbye Seongsan Ilchulbong. I am glad I had conquered YOU!
No worries! I will be back again, I promised! (:

At the same time, we headed back to Seongsan(AGAIN) in the early noon to catch the Haenyo Diver Women performance at the bottom of mountain right beside it. (We headed over to Udo Island in between, which I will mention the it in my next post.)

The ladies had already started singing their folk song which talks about their life story as Woman Diver.

The Diver ladies in their wear performing. 🙂

According to the translator over there, such traditions are now facing extinction. The total numbers of active Diver Woman adds up barely 5,000, which compared to the past where there are about 30,000 of them.
At the current moment, the youngest diver woman is aged 54years old while the eldest is 85years old! =O
[These ladies were born and raised in Jeju Island itself. As the island is surrounded with many seafood, they are trained to pick up this job at a young age(roughly at the age of 12) to learn the art of this job and keep it as a form of living.]

FACT: Do you know that Haenyo Diver Women can dive up to 20 meters, holding their breath for several minutes without any oxygen mask!

The ladies are setting off! *hats off to those grannies*
Thank you so much for your hard work! (:

Can’t remember what are these.

Hello Seongsan! I was at the peak in the morning yo! 😛

One of the diver woman lugging her heavy gears heading back home with her catch.

PS: Not ALL Diver women are willing to be featured/ to take a photo. Do asked before you snapped a photo of them. (:

Pali Pali! Do note this place down on your itinerary if you’re coming to Jeju island(East)!
Seriously, you’ll have no REGRETS to wake up at 4am and climbed those steep stairs to view the Sunrise.
I would not agree much that the name ‘Sunrise Peak’ was given to Seongsan Ilchulbong for nothing. 🙂

If you’re not staying somewhere near but yet you want to climb the mountain, do carry on! The views at the peak varies differently at different time too. (I believed the Touch Korea Tour Fun Team peeps would agree with me, especially Michelle eh? :P)

2 more entries to go before I’ll end my Jeju Trip!
Do stay tune as I’ll explain along the way for you guys.

This site uses Akismet to reduce spam. Learn how your comment data is processed. 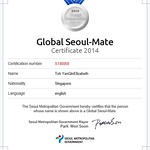